The European Beth Din of the Conference of European Rabbis

The European Beth Din was established over 15 years ago, as an initiative of the late Chief Rabbi Lord Jakobovits z”l, who was then president of the Conference of European Rabbis. He passed away in 1999.

The EBD is currently headed by Dayan Chanoch Ehrentreu Shlit”a, who has over 30 years’ experience in leading the most distinguished UK Batei Din in London and prior to that in Manchester. He is the undisputed senior Halachic personality in Europe. In addition, the EBD employs Dayanim from established European Batei Din.

Whilst the EBD is based in Basle, Switzerland, it serves individuals and communities from the following countries: Germany, Spain, Poland, Bulgaria, Czech Republic, Slovakia, Austria, Hungary, Romania, Turkey, Norway, Sweden, Denmark and Finland The EBD is currently headed by Dayan Chanoch Ehrentreu Shlit”a, who has over 30 years’ experience in leading the most distinguished UK Batei Din in London and prior to that in Manchester. He is the undisputed senior Halachic personality in Europe. In addition, the EBD employs Dayanim from established European Batei Din.

Responding to repeated requests from European communities where there were no functioning Rabbinical Courts (Beth Din), the EBD of the Conference of European Rabbis was established to service the demand and provide comprehensive Jewish legal services across a broad array of European cities.

The European Beth Din is an affiliate of the Conference of European Rabbis.

Director of the European Beth Din of the CER: Dayan Elimelech Vanzetta

The Goals of the EBD of the CER
To serve communities and countries with no permanent and authorized Beth Din
To arbitrate ethical issues between the rabbis of the conferenceTo respond to current communal halachic queries
To resolve internal conflicts within communities.

The EBD of the Conference of European Rabbis provides the full range of Beth Din facilities, which include the following areas:

The EBD of the CER arranges Jewish divorces through the Get process. The EBD of the CER ensures that the Get procedure is carried out in a sensitive and caring manner, respects the dignity of all participants in the process and adheres to the highest standards of Jewish law to ensure the universal acceptance of Gittin administered under its auspices. The EBD of the CER also takes an active role in resolving cases involving spouses who refuse or are reluctant to deliver or receive a Get.

Sensitivity –The EBD of the CER is careful to treat every person with sensitivity and compassion, and tries to make the Get proceeding as smooth and as comfortable as possible for the participating parties. The Beth Din has women on its staff who are available to provide emotional and moral support to women who come to the Beth Din for a Get. Participants are also free to bring a friend to accompany them during the Get proceeding. A standard get procedure is non-adversarial and does not involve litigation. If necessary, the Get process can be arranged in a manner that does not require the husband and wife to appear together.

Why is a Get Necessary? - In order to end a Jewish marriage, halacha (Jewish law) requires a Get. Without the Get (absent the death of one of them), both husband and wife may not remarry under Jewish law.

The Get Process - The standard get process is conducted in English, Hebrew or, if necessary, in the spoken language of the parties. It takes approximately 90 minutes. The officiating rabbi asks the parties some standard questions to ascertain their names (since the Get document must accurately identify the parties) and their desire to proceed with the Get process. The Get is written by a scribe and signed by two authorized witnesses. The husband then presents the get to the wife in the presence of the witnesses, thus effecting the divorce under Jewish law. Once the Get has been received by the wife, the Get parchment is cut by the supervising rabbi and it is retained in the Beth Din files. The Beth Din issues a certificate (the ptur) to each party, generally after the civil divorce is finalized, indicating that a Get has been given and accepted and that each party is free to remarry.

Matrimonial Arbitration - In addition to the Get process, the Beth Din maintains an active practice in matrimonial cases dealing with property division, custody and visitation.

The Beth Din will convene a din torah (Jewish arbitration proceeding) in accordance with the requirements of Jewish law, comprised of expert dayanim (judges) experienced in adjudicating divorce cases. When appropriate, the Beth Din will include a child psychologist on the panel of dayanim or as an expert witness to assist the panel in deciding custody and visitation matters. For more information regarding the din torah process, click here.

The EBD of the Conference of European Rabbis is a full service mediation and arbitration organization that has earned a reputation, among Jews across the ideological spectrum, for handling dispute resolution with confidentiality,

Types of Cases - The Beth Din regularly arbitrates a wide range of disputes among parties, ranging in value from small claims to litigation involving several million dollars. These cases include: commercial (such as employer-employee, landlord-tenant, real property, business interference, breach of contract, breach of fiduciary duty, investor mismanagement, defective merchandise and unfair competition disputes), communal (such as rabbinic contract disputes and other congregational issues) and familial (such as family business, inheritance and matrimonial) disputes. Cases are heard by a panel of three dayanim (arbitration judges) or, on occasion, one dayan.

Expert Arbitration Judges - The dayanim who sit on cases include leading authorities on Jewish law, as well as lawyers and businessmen who are familiar with secular law and contemporary commercial practices. When appropriate, the Beth Din will either include expert professionals on an arbitration panel, or consult them as expert witnesses.

Procedural Fairness - The EBD of the Conference of European Rabbis maintains an impartial and confidential relationship with each of its clients. Hearings proceed in conformity with the Rules and Procedures of the Beth Din.

Legally Binding Rulings - Prior to having a case heard by the Beth Din, litigants are required to enter into a binding arbitration agreement. The Beth Din conducts its proceedings in a manner that is consistent with the requirements of secular arbitration law, so that the rulings of the Beth Din are legally binding and enforceable in the secular court system:

Confidentiality - The EBD of the CER recognizes that personal halachic status investigations often involve inquiries into confidential personal and familial information. The Beth Din staff employs the utmost sensitivity and discretion when handling these matters and respects the confidentiality of the Beth Din’s clients.

Expertise - The EBD of the CER, under the leadership of the Av Beth Din, Dayan Chanoch Ehrentreu, is a recognized authority in investigating and ruling on issues of Jewish halachic status. The Beth Din’s determinations and halachic rulings are respected across a wide spectrum of Jewish communities, and are recognized by the chief rabbinate of the State of Israel.

Dayan Chanoch Ehrentreu was born in Frankfurt am Main, Germany, in 1932. He has been Rosh Beth Din of the United Synagogue from 1984 to 2007. Formerly he was the Rosh Beth Din of Manchester from 1978 to 1984 and prior to that he was the Rosh Kollel of the Sunderland from 1960 to 1978. Dayan Ehrentreu has a tremendous experience in all Beth Din issues and heads the European Beth Din.

Rabbi Pinchas Goldschmidt is the Chief Rabbi of Moscow and President of the Conference of European Rabbis and Head of the Beth Din of Moscow, federating Jewish religious leaders in over 40 European states. Rabbi Goldschmidt possesses a degree from Ner Israel Rabbinical College and Johns Hopkins University in Baltimore, USA. In 2009 he was invited as a visiting scholar to Harvard University.

Dayan Menachem Gelley studied for many years at the Ponovez Yeshiva, Israel and Gateshead Kollel, UK. He joined the London Beth Din in 1993 and today serves as its Senior Dayan. He has lectured extensively on Jewish law and is also the rabbi of the Ohr Chodosh Synagogue in Golders Green

He is a Chair of the Standing Committee and the distinguished member of the Presidium of the Conference of European Rabbis.

After pursuing many years of rabbinical studies in Ponevezh Yeshiva in B'nai Brak and in Mir Yeshiva in Jerusalem, Rabbi Moshe Lebel started in 1990, upon the request and encouragement of Rabbi Moshe Soloveiczik, the project of the Yeshiva Torat Chaim in Moscow, which is still running very successfully today. He is also a Dayan in the Moscow Beth Din.

He is a rabbinical Director and distinguished member of the Standing Committee and the Executive Council of the Conference of European Rabbis.

Since 1990 Rabbi Raphael Evers was the rabbi of the United Dutch synagogues (NIK). Also, he was the principal of Beth Midrash Binyan Ariel (school for teachers and rabbis) and the face of the Dutch Jewish population on public affairs, responsible for press-releases, radio-interviews and TV interviews.

Since 2016, Rabbi Evers has been Chief Rabbi and Av Beth Din of Düsseldorf (Germany) and a member of the Beth Din of Germany. He has now written nine responsa works on a wide variety of modern halachic problems.

The President of the Arbitral Tribunal, Av Beth Din, Rabbi Yehia Teboul, is an internationally recognized Dayan. After years of study at the "Hahmey Zorfat" yeshiva in Aix les Bains, and in the kolel in the city of Marseille, he was appointed to the head of the kolel in Lyon, at the same time he received a diploma of a rabbi and judge from Rabbi Yitzhak Kulitz. In 5755 he was appointed to the judge in Lyon's community, and 5757 Dayan Teboul became theHead of the Court. He is the author of the books: "Marot Yesharim.

He is a distinguished member of the Standing Committee of the Conference of European Rabbis and is a reference in matters of Dayanout.

Rabbi Réouven Ohana is the Chief Rabbi of Marseille and Provence Alpes Côte d’Azur region (area) - the third biggest Jewish community in Europe. Rabbi Réouven Ohana studied for many years at the Mirrer and Grodna Yeshivahs in Israel. He is Chaver Beth Din and Av Beth Din Leguyiur in Marseille since 2003.He has many mosdot in Marseille, and he is Rosh Yeshivah Merkaz Halimoud.

Rabbi Eliezer Wolff born in Strasbourg, studied in the Yeshivot of Kol Tora and Ponewez. After his marriage with Dina Meyer, the daughter of Saint Louis Rabbi, he continued his studies of Dayanout in Nishmath Israel. He held several positions of Dayan in Nice and Toulouse. Today he has the function of Chief Rabbi and Av Bet Din of Amsterdam. He is the father of 7 children and the grandfather of 6 grandchildren. 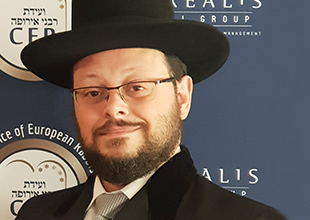 Director
of the European Beth Din
of the CER