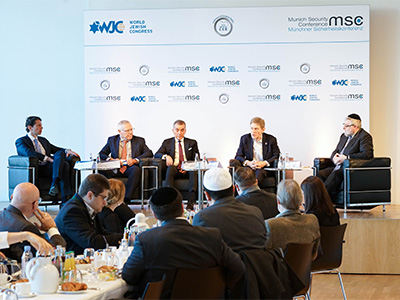 On February 27 in Moscow, Prime Minister Netanyahu met with the heads of the Russian Jewish community. The meeting was organized by the Embassy of State of Israel in Moscow and Russian Jewish Congress.
Prime Minister Benjamin Netanyahu said in his speech: “We are very pleased to meet with you during today’s visit. I am very happy and proud of the right to head Israel and, of course, to represent many Jews in such new relations as these. The Russian-speaking community, more than a million people, have changed our country, and, together with the Russian Jewish community here, in Russia and in Moscow – they are a link, a “bridge” between our two peoples.

The fact that Israel has such good relations with one of the strongest world powers is important. But we care not only about ourselves, we care about Jews, wherever they are. Of course, we know that we must fight together with demonstration of anti-semitism. Yesterday I spoke with the rabbi of Buenos Aires, we see what is happening in some parts of Europe and in North America. There is one answer to anti-Semitism: first of all, this is a strong Israel”.

Rabbi Goldschmidt in his address underlined that good relations between Russia and Israel are very important to the local Jewish community and that the heart of every Russian Jew was “standing still” when the Israeli Hymn sounded along the Internationale at the tomb of the unknown soldier next to the Kremlin at the last Victory Day when Netanyahu visited Russia.
Goldschmidt also expressed his hope that Russia will adopt with other countries the IHRA definition of anti-Semitism including anti-Zionism.
«Сontrary to difficult Diaspora Israel relations in other countries, the Russian Jewish Community has excellent relations with Israel», – added rabbi Goldschmidt.