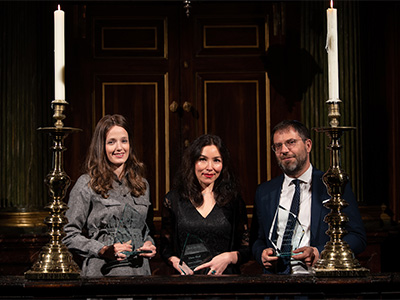 It was a case of old world meets new world as the Conference of European Rabbis held their awards ceremony for their Annual Internet Entrepreneurs Competition at the beautiful Bevis Marks Synagogue.

The event, held last year in Paris, aims to recognise innovative new technological and entrepreneurial talent from across the world, which embraces the Jewish value of Tikkun Olam.

More than 120 guests, including the CER’s president Chief Rabbi Pinchas Goldschmidt and chairman of the Board of Patrons Boris Mints, attended the event which was held under candle-light in the UK’s oldest shul.

Three entrepreneurs were chosen by a judging panel from four hundred start-ups entering the event  – with cash prizes given to digital and web-based ventures that are changing everyday life for the better.

Rabbi Goldschmidt said: “The CER is proud to recognise revolutionary technology and entrepreneurial talent from across the world, which embraces the Jewish value of Tikkun Olam – repairing the world.

“Rewarding talented internet entrepreneurs annually is the CER’s way of helping repair the world and help build a better future for our children who will have to deal with robots, climate change and cybercrime.

“The winners of this year’s CER Internet Prizes have demonstrated their unceasing commitment to the use of technology as a force of good in society.”
Also on the judging panel were Dr Cornelius Boersch, CEO and Founder of Mountain Partners, Berlin-based businessman Ilja Gorelik and Global Advisors LLC (DST Global) COO Leonid Solovyev.

First prize of £26,000 went to Yael Zamir, CEO of Israel-based Embryonics, which uses data from in-vitro fertilisation (IVF) centres across the globe to develop a network and accurate system to monitor and select embryos.

The start-up uses cutting-edge AI algorithms that optimises and significantly improves the journey and success rate of IVF treatment.

Both Rabbi Goldschmidt and Mr Mints were warmly applauded as they presented the first prize to Ms Zamir. The second prize went to Elena Sinel, founder of UK-based Acorn Aspirations – an online platform that offers young people the opportunity to learn the necessary skills to become tech entrepreneurs and leaders.

Aimed at children between the ages of 12 and 18, the platform hosts bootcamps, incubators and seminars exploring the workings of computer systems, including artificial intelligence (AI), machine learning and data science.

Third prize went Yehuda Elram, co-founder and CEO of Israel-based EggXYt – an innovative biotechnology company that revolutionises hatcheries by enabling sex detection of chick embryos immediately after the eggs are laid and before they enter the 21-day incubation process.

David Orman, managing partner at Hatch-House, gave the keynote speech at the event in which he gave an insight into future 3D technology advances.

The CER established the event five years ago to encourage and reward innovation from throughout Europe.

The first event took place in Luxembourg in 2013, while next year’s is to be held in Israel.